Frank Julian: A crusader in the fight against AIDS

The fight against the effects of AIDS 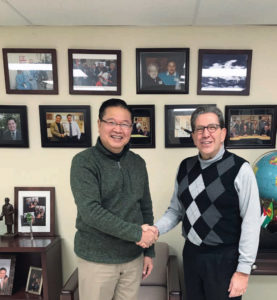 It was in the year 1988 when Frank Julian poked his finger with a “dirty needle” while performing screening tests on a hepatitis patient and IV drug abuser, a common risk factor for contracting or transmitting viral infections such as HIV/AIDS during the time. Julian was tormented that he might have been infected and fear of losing his family made him sleep-less. “I’m driving and praying, please, God, I don’t want to lose my family,” Julian recalls. Thankfully, he was safe. But, the incident shuddered him so much that he ended up founding FAWN: Fighting AIDS with Nutrition.

Julian’s passion for help and care for those suffering and dying of the disease landed him in Afri-ca, where he witnessed open graves prepared for AIDS patients facing death. ‘It was a terrifying sight, which made me depressed and anxious,’ recalls Julian. While on the trip, he was asked if he could help arrange for shipments of the nutrition supplement Ensure. He realized how improved nutrition could help AIDS patients live longer and stronger and he founded Ensure for Africa in 2001, which later be-came FAWN: Fighting AIDS with Nutrition.

‘We, at FAWN provide thousands of AIDS
victims with the life-giving nutrition that is so critically needed for their survival,’ says Julian.
‘This liquid nutrition greatly increases the strength and overall health of the AIDS patient when taken alongside Antiretroviral Therapy. Many have been able to return to work and live a normal life after consuming nutrition. People, who were unable to lift their child due to weakness, now play with them added a smiling Julian.

Talking about partnership Julian says, ‘nothing could have been possible without World Medical Relief and President George Samson. Dr. Samson’s generosity has helped us maintain a consistent shipment schedule that resulted in dramatic enhancements in the quality and quantity of life among AIDS patients in Sub-Saharan Africa’. World Medical Relief has been collecting, storing and shipping the cans of nutrition for the past 17 years.

‘I was exhausted after the first shipment. A number of challenges created incredible vulnerabilities to delays, non-deliveries, damage of cans, etc. Then, I reached out to Dr. Samson and asked if he could help and the rest is history. WMR helped FAWN since its second shipment that goes back to September 2001,’ Julian said.

According to Julian, since FAWN partnered with World Medical Relief, their influence has expanded globally. “We started with Botswana and now we work together for Somalia, Philippines, Kurdistan, Haiti, Kenya, and Senegal.”

FAWN also partners with school and colleges such as The Eugene Applebaum College of Pharmacy and Health Sciences, one of the founding colleges of Wayne State University (WSU) to collect cans of liquid nutrition. The FAWN student organization at WSU focusses on providing fortified liquid nutrition to support those living with HIV/AIDS and other catastrophic illnesses around the world and to support and educate the community about healthy and safe nutrition goals.

Being raised in the Catholic Church, Frank Julian’s call to ministry came at a young age. The boy from

Dearborn’s Edsel Ford neighborhood graduated from Grand Valley State University in 1977. He has been awarded the Gorden Gayette Humanitarian Award from the Wayne County Pharmacists Association. Julian became a nurse of the year in 2002 at Health Care Partners Home Care of Southfield, Michigan. He also served as a senior pastor at Faith Christian Assembly in Melvindale.

Julian is a charismatic man but perhaps the most striking part of his feature is his smile. He won the McDonald’s Smiling Contest Award in 2000, where he smiled for 7 hours and 43 minutes winning $10,000. Julian also authored a book titled “AIDS, Love’s Fight”, which turned into a motion picture — “Forbidden”. The book is loosely based on Julian’s life. Though married in real life, in the book he chose to be a priest instead of marrying his love interest. The book also portrayed his passion to help those dying of AIDS in Africa. He and his wife, Peggy, also a nurse, have two children and four grandchildren.

Garfield H. Laity, of Sterling Heights, loving husband, father, grandfather, great grandfather, brother, uncle, and true American patriot, passed away February 4th, 2019. The love of his life, Ruth, preceded him in death on May 6, 2016. They were married for over 70 years.

Gar and Ruth were longtime volunteers. They began on February 1, 1988, and remained active until April of 2007, just under 20 years! Gar was an ‘all around guy’; he could do anything that was asked of him, especially make something out of wood. He measured meticulously and could hang a picture with such precision. Ruth typed hundreds and hundreds of letters thanking people for the items they donated to us. They were both so dependable and personable.

As active members in their Adult Sunday School class, they were instrumental in getting the class’s support of our annual blanket drive. The money raised is used to purchase new twin-size blankets and baby blankets that are given to agencies helping families in addition to 10,000 disaster blankets donated from the Department of Defense that are shared with homeless shelters.

Bill was in the army and sent to Japan as part of the occupying force after WWII, and when the Korean War began, he was sent there and served until May 1952. Upon returning from service, he began working as a repairman in the family business owned by his father. He worked there until he was 65 having taken over as President of the company upon the retirement of his father.

In April of 1954, after returning from service, he married Corinne Frank; Corinne died in 1976 leaving him with a young family to raise. He married Carolyn Brandt who came with a son to add to the family. Carolyn had known Bill and his family all of her life as they attended the same church, sang in the church choir and served on the church council together. They enjoyed 42 wonderful years of marriage.

After retirement, Bill joined Carolyn as a volunteer at World Medical Relief – her place of employment. He used to pick up donated medications from doctor’s offices across Metro Detroit and later worked in the international medication department sorting and packaging donated medication for their overseas program. He continued doing some of that at home when it became hard for him to physically come to WMR. Bill volunteered for 23 years.

Ruth, Gar, and Bill are fondly remembered and greatly missed. They were our “Angels of Mercy.” 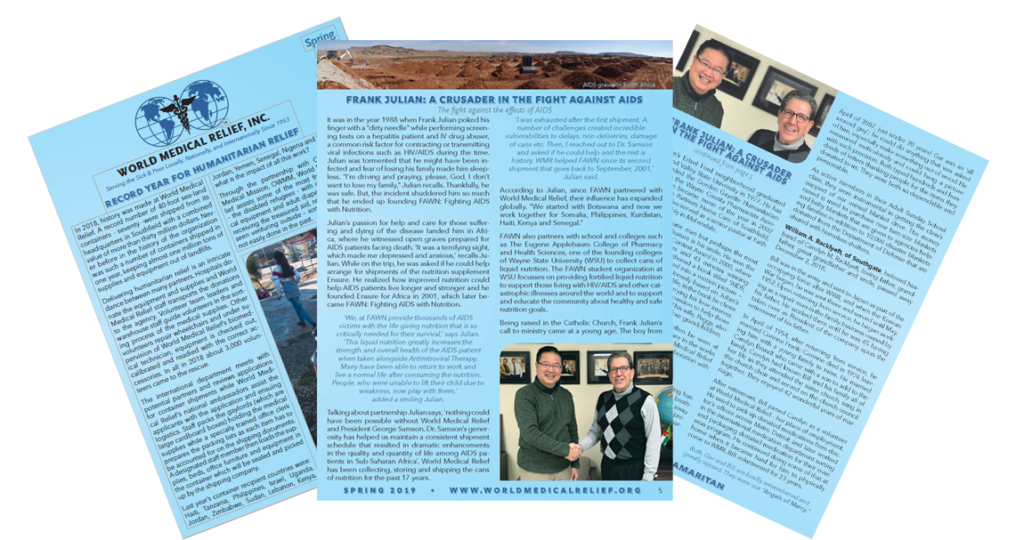